Each step—most no more than a feeble shuffling forward of my feet—and I am that much closer to my goal. The sun bears down upon me as I sweat, still wearing layer upon layer because it requires too much energy to remove them and the weather is too unpredictable. I sleep in everything I am currently wearing except my outermost rain jacket which I have now for its wind protection. My local guide, nicknamed Gavi, is fifty meters ahead but visible with his bright orange pants. Speckled in the distance are a few other trekkers who had an early start this morning; my group began at a leisurely 8:30 am and now, some four-and-a-half hours later, we can see our goal: Annapurna Base Camp. The air is thin and I am exhausted from a maddeningly-fast, four-day ascent to 4,130 meters. I pause for a photo as I pass the sign welcoming me to ABC—annoyed the sign is still some twenty meters from the lodges. Still, five minutes later and I climb the final steps, breathe a sigh of relief and stow my gear in my unheated room quickly so I can join everyone in the warmer common area. The ascent is only half the journey.

Trekking in Nepal has been one of my dreams for many years; I am so incredibly proud to have made good on this goal. Pokhara—about eight hours from Kathmandu via bus—is the perfect starting point for all treks in the famed Annapurna Conservation Area. When I arrived, I had little plan other than to trek in the Annapurna region for as much time as possible. Hiring a guide made the most sense to me; I would have loved finding a group, but the trekking season was declining as monsoon season began. With little desire to embark upon my first Nepal trek solo, I sought a guide. After searching both Kathmandu and Pokhara, I stumbled into Gavi while walking around Lakeside and a few hours later hired him to accompany me to ABC and back down. That afternoon, registration cards were filed, fees paid and the next day we departed at 7:30 am on a two-hour bus ride to the start of our trek.

It was obvious as we departed that I had overpacked. “At least,” I thought to myself, “it all fits in my backpack.” Some six hours later—countless stone steps and 1,000 meters higher—I found myself wishing I had the foresight to leave just a little more with my guest house in Pokhara. But upon reaching our first night’s destination, a mountain village called Ghandruk, all the pains and challenges of a long climb were absolved—with the solitary mountain views I realized how completely worthwhile this trip already was.

Teahouse treks are far more developed than I imagined. Lodges exist every hour or two on major routes supplying food, drink and rest; they also eliminate the need to carry most supplies as a simple, private room with a bed is cheap and one can purchase warm meals at any stop. These lodges also provided great opportunities to meet other trekkers; my first night I encountered Darius and Melanie, from Germany, and we and our guides agreed to trek together since we had the same timeline and route. 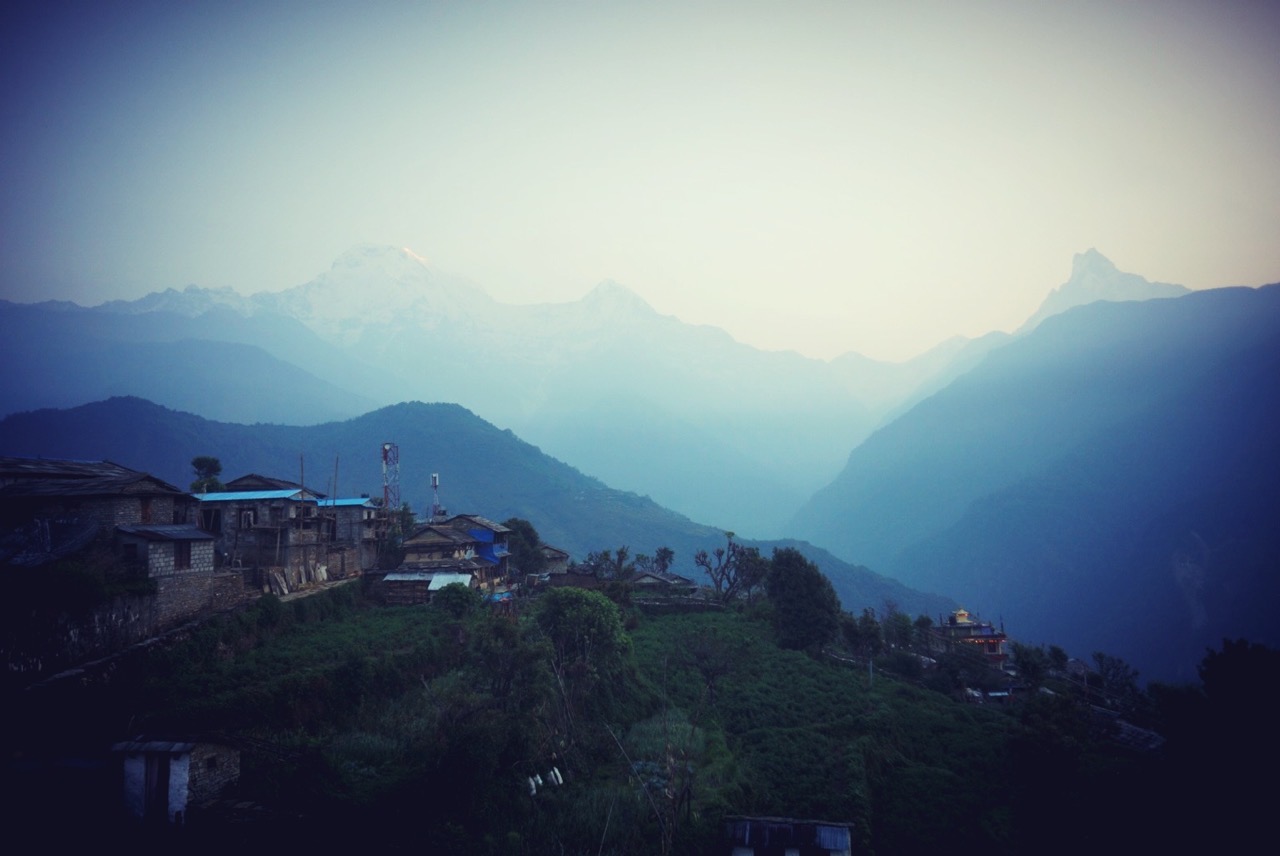 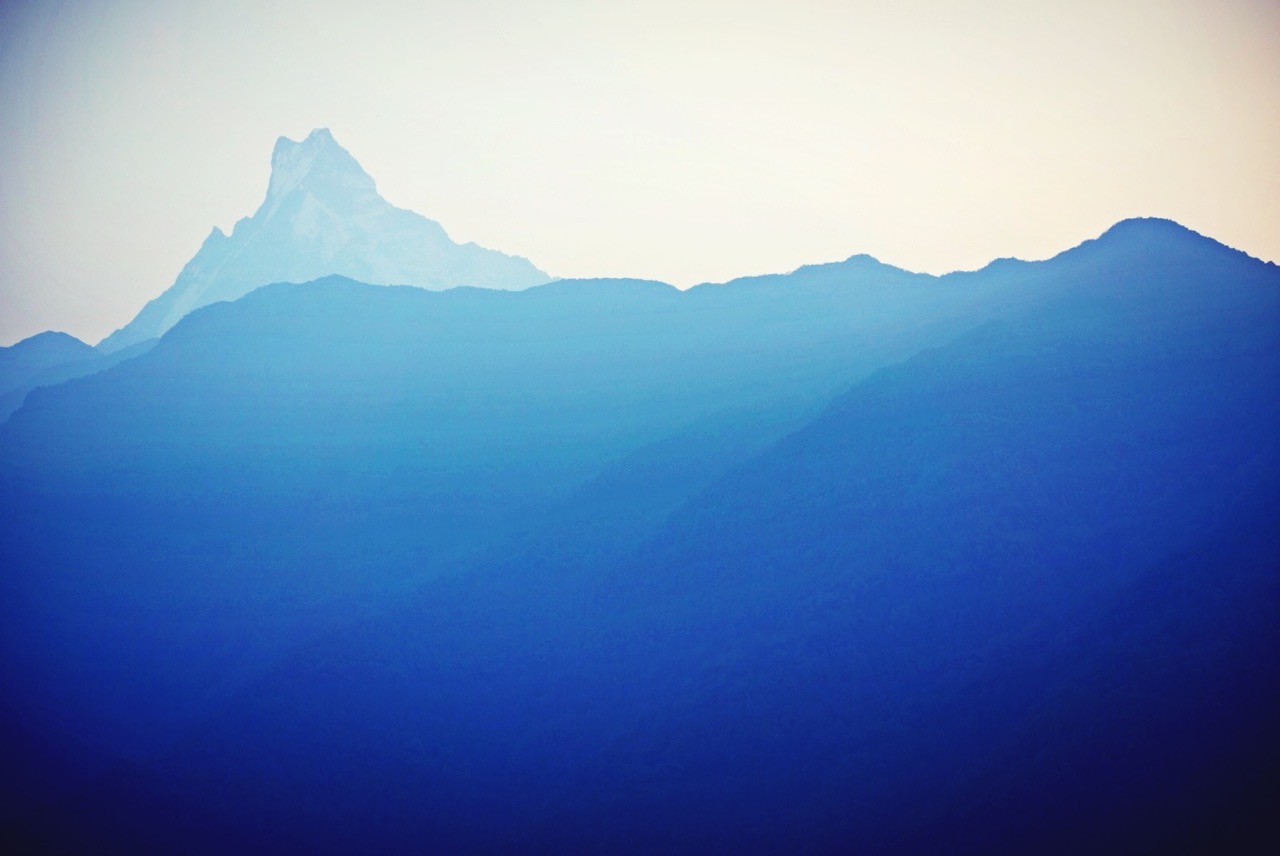 Waking at sunrise the next morning, I both enjoyed the incredible views and realized these would be long, full days spent traversing hillsides and following small paths between mountain villages. In addition to their towering height, the Himalayas also contain an incredible diversity, especially in the lower regions. Truly stunning landscapes and forests surrounded the first few days of the trek, terraced mountainsides and small villages of Nepali living one, two, even three days from the nearest road. Donkey caravans carry supplies to our second-night’s village of Sinuwa at which point no animals were allowed; locals would then carry everything from food to petroleum canisters as far as base camp some ten or more hours away. Even children often walked two or more hours from a home village to the nearest school—then a return trip in the evening. I was absolutely stunned, partly by the people but also the landscapes. Each day, nature returned with mists rolling through the valley below; I loved standing above the clouds. And not only was it beautiful. Being relatively far from cities, having powered down my phone and with no wifi to be found, I took this opportunity to disconnect. Entirely. Which may have been one of the best parts, one week with me present and quiet, without interruptions. Only my mind and those around me to occupy the days. Part of it was psychological; I had to keep pushing myself and my limits. Our third night spent at 3,200 meters in Deurali was the coldest, wind gusting through the poorly-insulated doorway. I began to tire, hauling my load day after day, step after step. 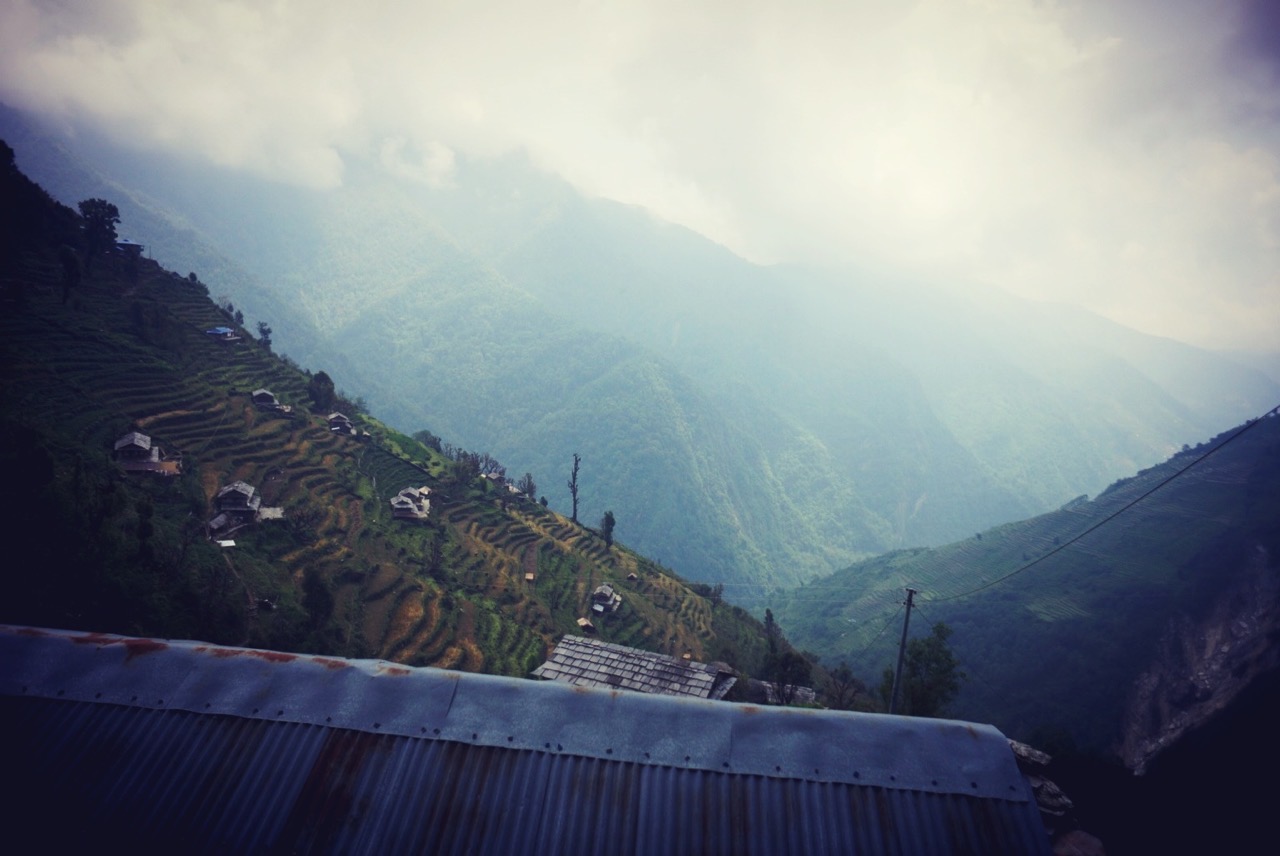 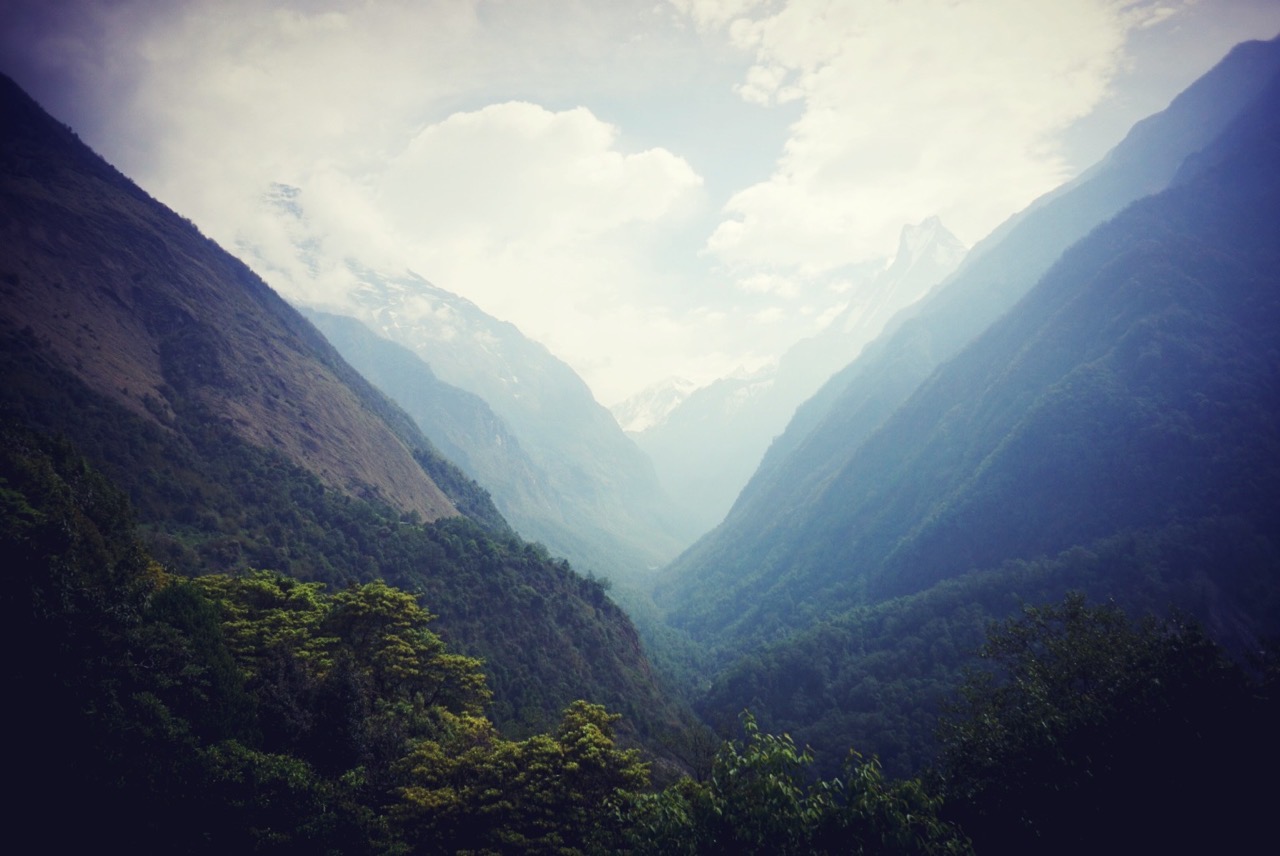 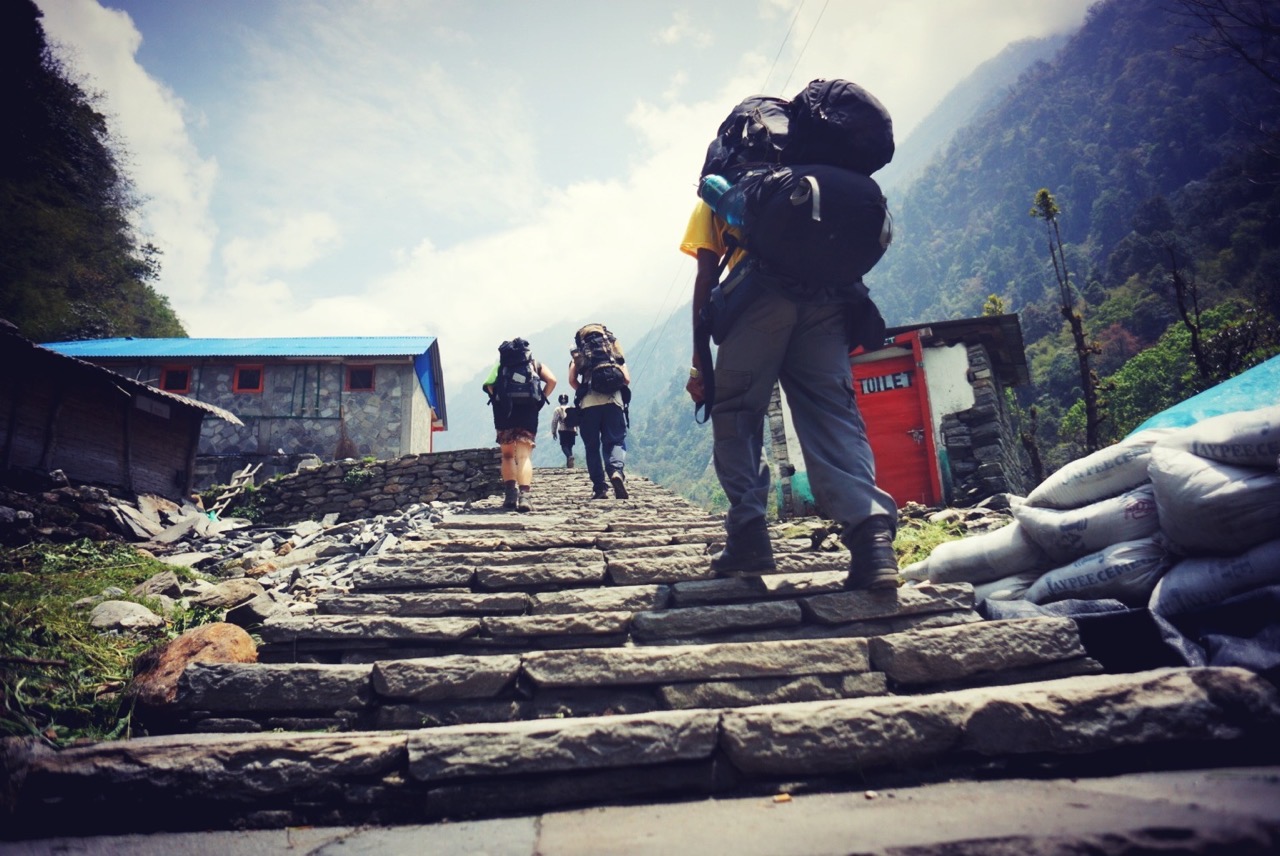 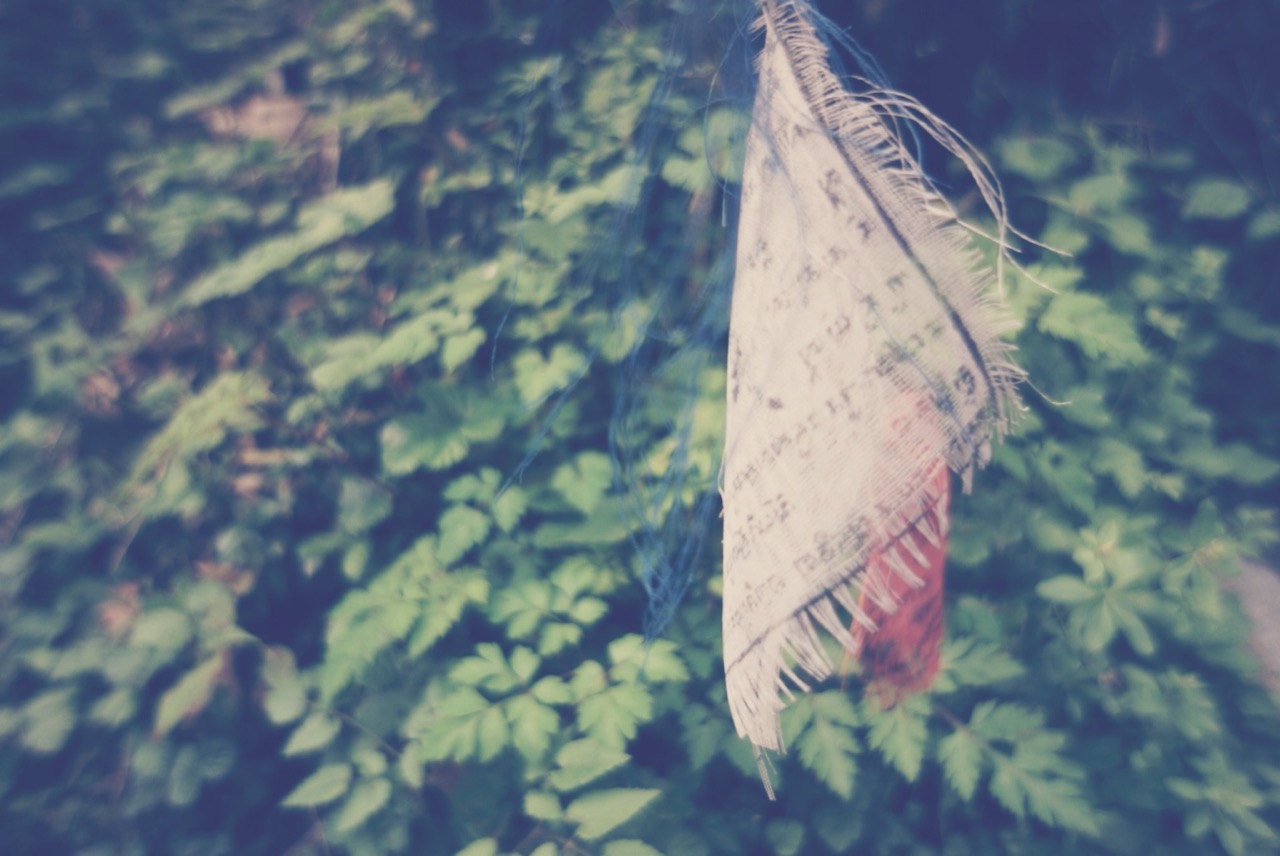 We reached our highest point Sunday after an aggressive pace climbing some 3,000 meters in elevation in four days; it was here I felt, for the first time in my life, the effects of altitude. But for the discomfort of an upset stomach and a light headache, standing in the Annapurna Sanctuary at the base of 8,000-meter peaks is truly incredible. It’s immensely peaceful. The environment, unforgiving, reminded me its power; a whiteout snowstorm came through mid-afternoon, relegating us inside to the lodge’s common area drinking tea and making new friends. And for me, feeling less-than-good, it provided a warm respite from the cold lodge rooms; sleep that evening was hard to find, wrapped under two blankets and still wearing my day’s layers.

Rising before 5 am to witness sunrise in the valley, Monday morning was frigid. We had a few simple goals: enjoy the views, eat a quick breakfast and begin the long trek down. Though the clouds were less than cooperative, I managed a few lovely moments surrounded in all directions by Hiunchuli, Annapurna South, Annapurna I, Gangapurna, Annapurna III and Machhapuchhre. I pushed myself to explore base camp, even though I still felt sick—when else would I be able to see this? Still cold, I forced myself to finish my soup and tea. A few more photographs and our group grabbed our gear, departing ABC. 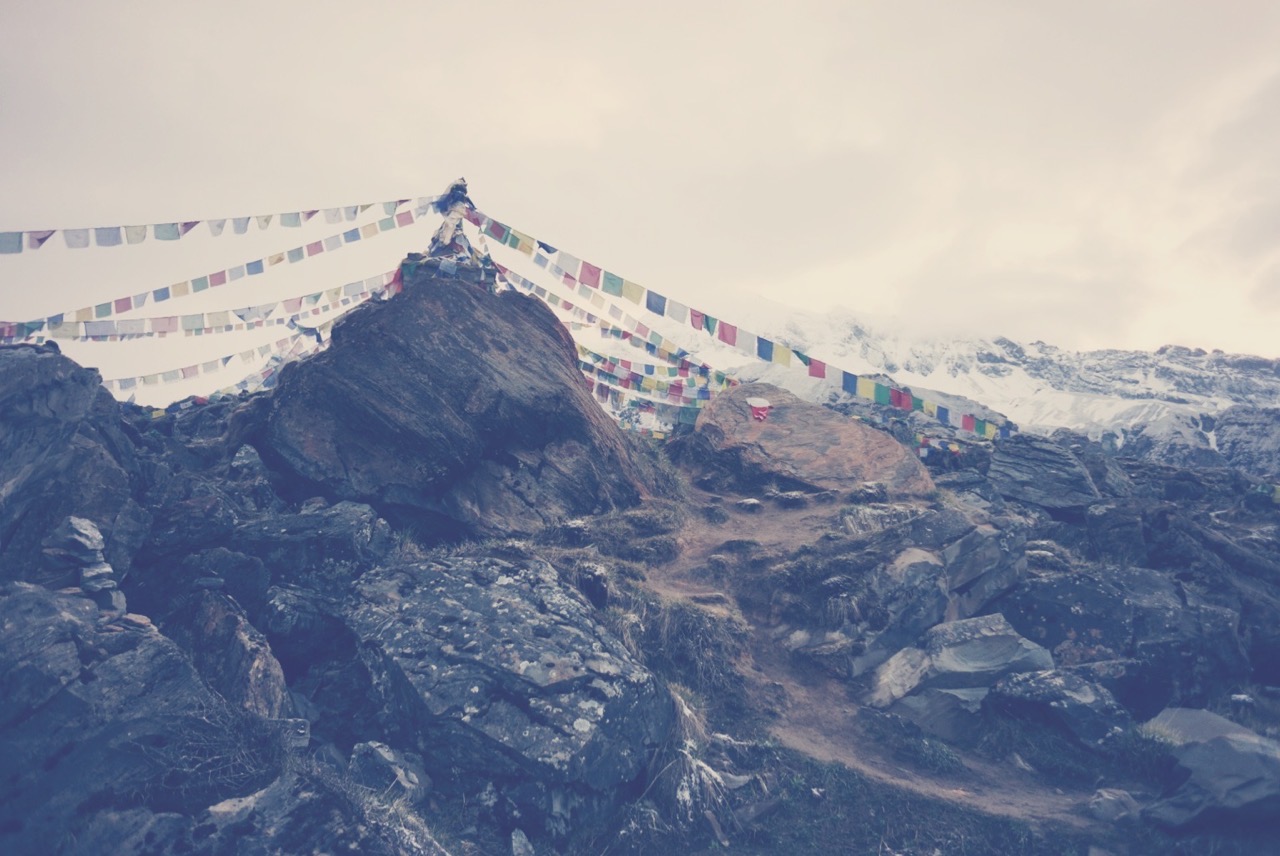 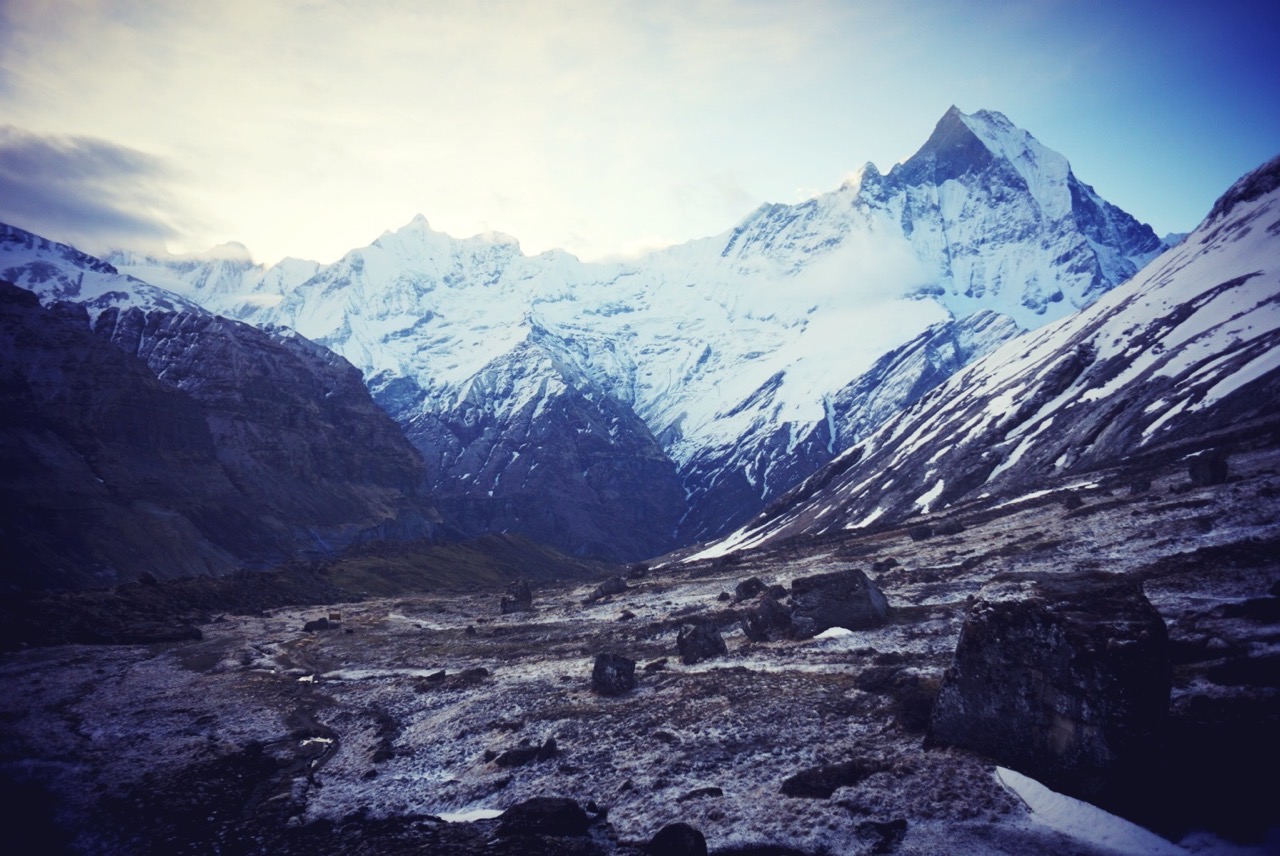 Our descent was nearly twice the pace of our ascent though we did our best to enjoy our remaining time in the Himalayas. Again, I found myself looking straight at the ground in front of me to avoid tripping; Gavi constantly reminded me to look around at the awesome views—glaciers, peaks, even wildlife. I was simply happy to return to warmer (and safer) climates down valley. After we had dropped below 3,000 meters, I fast-realized just how much the altitude had been impacting me—what I thought was a minor headache was anything but—and was both glad and lucky to have made it down this far safely. Though walking fast, our group of five managed a comfortable pace as we walked through many of the same areas we had passed a few days prior. After Chhomrong, we split from our upward route and headed toward Jhinu for an easier descent (relatively fewer hills) and the opportunity to visit the local hot springs. By Wednesday, we could once again see Nayapul, goodbyes as I climbed onto the local bus. A few hours later and I was back in my Pokhara guest house. 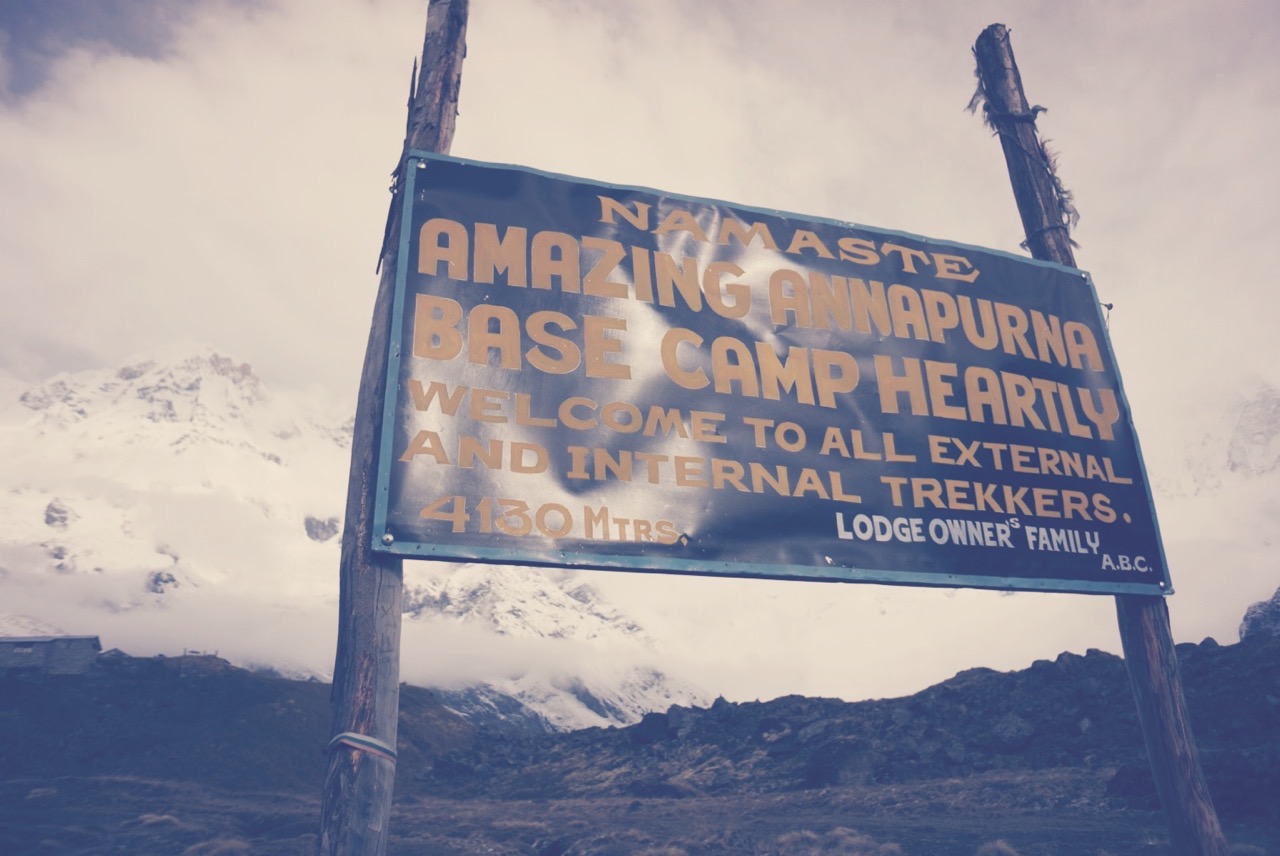 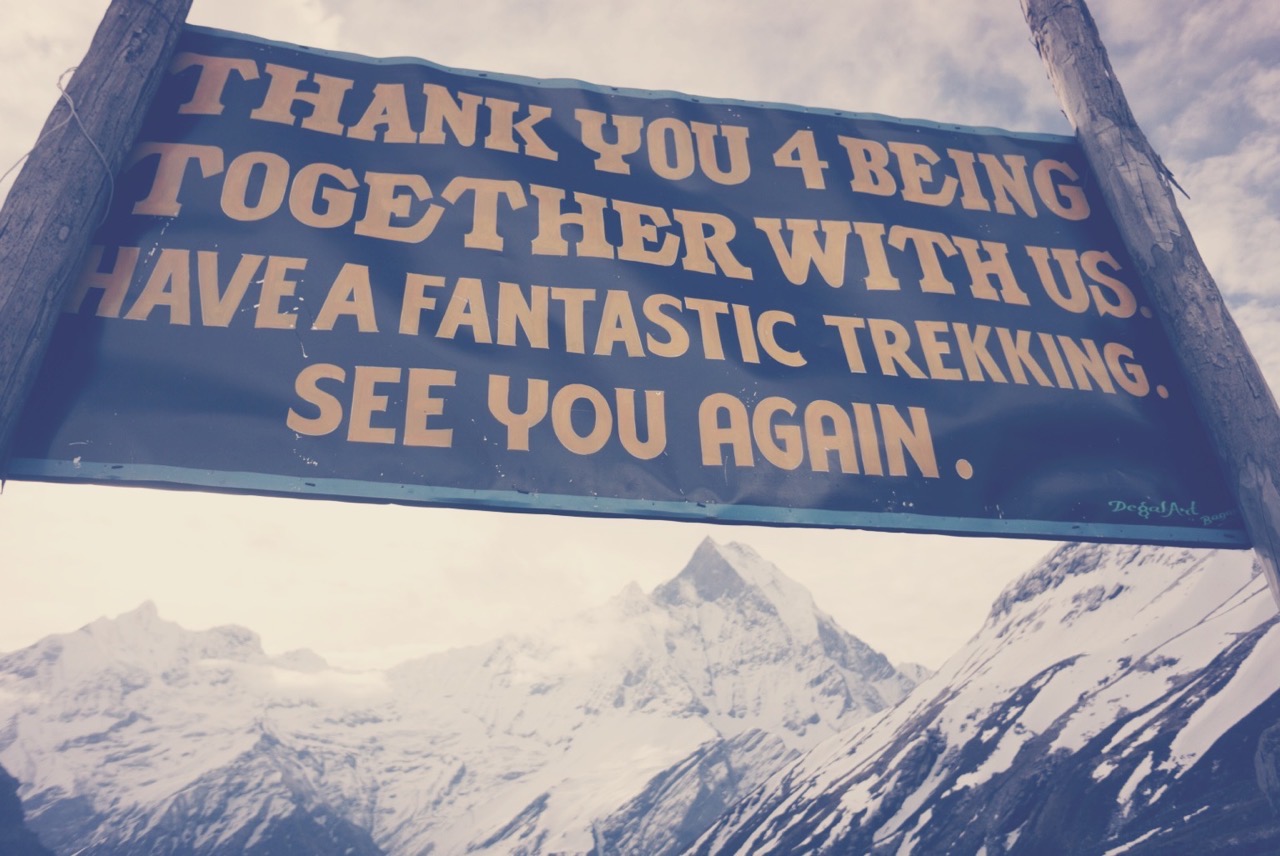 My week in the Himalayas was full of challenges, new experiences; I have achieved one of my dreams. In some sense, trekking was far more challenging than I imagined. Spending time above 3,000 meters is trying on anyone, much less full days of hiking while carrying a full pack. Part of me wonders why I ever though it might be easy; yet another opportunity for me to learn. Nothing easy is worth doing. If anything, I look back upon my experience and find myself thankful for Gavi, my new friends and all those whom I encountered on the trail. I am both exhausted and fulfilled.