This is the story of getting stranded in China. Not quite the airport layover I expected when purchasing tickets from Hong Kong to Tokyo by way of Dalian. (I should note that—as I write about this adventure—I arrived safely in Japan yesterday.)

Maybe the Air China check-in staff at Hong Kong International Airport should have been my first clue? They expressed concern that neither Sarah nor I had valid China visas in our passports; though from previous experiences we were confident that our less-than-24-hour layover was allowed. Plus, what airline would sell a fly-through ticket if it were not possible to use? After an extended wait, the Air China staff were able to reach Dalian International Airport via telephone and confirm that, yes, we would be just fine to transition there onward. We were told to seek airline staff once we arrived.

Landing in China, however, the single-runway airport was almost entirely shut down for the evening; no gate staff greeted us and we were perhaps the only two non-Chinese aboard the flight. At China customs and immigration we presented our passports, arrival cards (with the visa section untouched) and a printout of our itinerary for the next morning (as Air China had not yet provided boarding passes for that flight). Tension rose as the customs official took our passports, asking us to wait at which point he and other officials conferred in Chinese. Waiving us over to another desk we waited anxiously and watched as we received on-the-spot visas for China and were waived into the country.

Trouble found us maybe a half-hour later after we had settled in a quiet section of the main terminal. A security guard with limited English skills asked us why we were there and we explained our ongoing flight was early in the morning; he acknowledged this but insisted we had to leave the airport. By this point in the evening (maybe midnight) the temperature was maybe -11 degrees Celsius and we had no Chinese cash (yuan) nor any idea of where to go or what to do. After a few minutes stumbling around the dark airport, we found an ATM and were fortunate our banks allowed withdrawals even without a travel notice to China. With some 2,000 yuan (equivalent to some $200 USD) we headed into the cold evening in search of a taxi.

If I had to define that moment, it was a mix of anger and confusion and terror. In a foreign country with no knowledge of the language—nor little reciprocation from locals—relatively little cash and frigid evening temperatures, I found myself genuinely concerned for the first time during this adventure. Having a traveling companion was maybe the most important aspect for staying composed and confident; though I was anything but. Try as I might, none of the passengers remaining in the terminal spoke English. Without reliable internet, we were on our own.

Travel often requires trust and reliance upon the kindness of strangers. Even more than that, getting into a cab or venturing into foreign places involve risks. It comes down to mitigating risk and making smart choices, generally just being aware and smart. But finding ourselves lost in Dalian? Frightening.

Stumbling past taxi stands and a few personal vehicles, we happened across a booth with mostly Chinese but also two English words: bus tickets. Sadly, neither of the young agents could comprehend English though that did not dissuade them. As we turned to leave, they excitedly motioned for us to stay as the guy pulled out his mobile phone. Handing it to me, I found a woman on the other end of the line with limited conversational English; I thankfully conveyed that we needed a “cheap hotel near the airport” to which she had me hand the phone back to its owner while they conferred. The phone was passed back-and-forth for maybe five minutes at which point the woman quoted a price (400 yuan, or some $60 USD) and said a bus would take us there. While awaiting the shuttle, the two staffers invited us inside their heated booth and out of the cold. A minivan arrived and took us into Dalian where we found a cozy—and completely quiet—hotel. We checked-in around 1:30 am.

Awake some five hours later, we hailed a taxi to the airport. Again, English failed though we could share our destination with the driver via my iPhone’s map—which itself had conveniently changed all information into Chinese. Checking-in at the international terminal, we were through immigration and customs and out of China at 8:55 am.

I’ll be avoiding China moving forward. But at least I have the stamp in my passport? 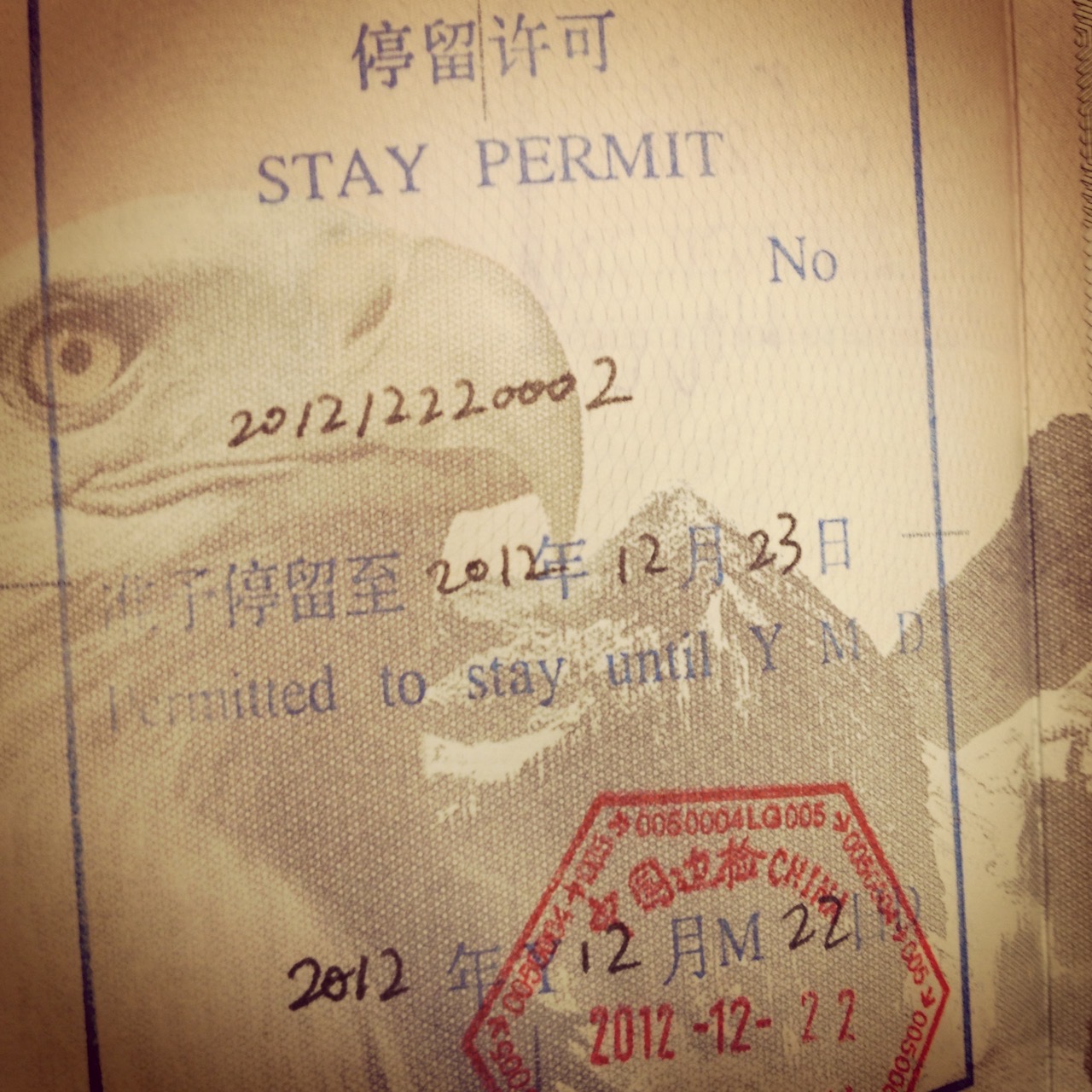